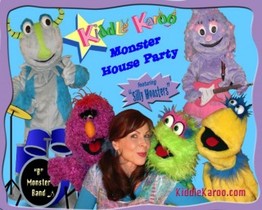 Kiddle Karoo's theatrical puppet shows and kid's concerts are a unique combination of live performers and Muppet style puppets. Kiddle Karoo, along with her puppet pals and other costumed character friends, engage and delight children throughout the nation. With many themes to choose from, the Kiddle Karoo puppet shows and Kindie rock concerts are the perfect entertainment for any family event!  By using their special blend of original award winning pop music, singing, dancing, magic, puppetry, and comic antics, the Kiddle Karoo shows have become a favorite in children's entertainment!

"Kiddle Karoo is one of the best shows of our Childrens Series every year. The smiles on the faces of kids and parents alike attest to the joy Kiddle Karoo creates. Just look at the pictures! They speak for themselves." - Renee Bodie Executive Director, Levitt Pavilion - Los Angeles & Pasadena