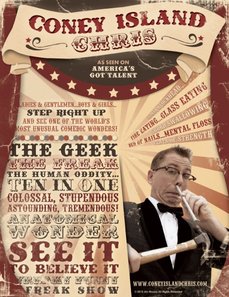 Mixing equal parts funny and freaky, “Coney Island Chris” draws on a rich history of sideshow feats and endurance popularized on circus midways and along the boardwalk at Coney Island. Chris’ performances are as shocking as they are sidesplitting and are not recommended for the faint of heart. His unique brand of comedy chaos has become a popular attraction at nightclubs across the country and he was featured on the hit television show “America’s Got Talent” where he made it to the quarter-final round of the competition.  Coney Island Chris learned many of his amazing sideshow skills from some of the original performers who popularized the acts on midways across the country.
Reviews

" He did a wonderful job at our fair and his act appealed to everyone from kids to adults.  I could see his act working well at any county fair or festival.  He was also gracious enough to participate in some local media to promote the fair."  - Chelsey Jungck - Nebraska State Fair