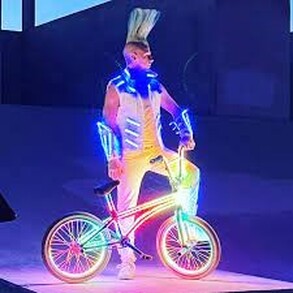 Blake Hicks is a professional BMX Flatland rider. Cirque trained &   performer bred. His unique skills combined & electrical knowledge   has driven him to create his new act “TRON  Bike”. He started riding as   a hobby in his childhood at 18. With the Debut of his bike at EDC 2011   in Las Vegas to over 110,000 attendees, Blake’s promo video went     viral on YouTube and since then he has continued to push his act to   newer heights. His unique act engages everyone young and old as he   turns the standard bike we all   grew up with into a spectacle everyone   enjoys.