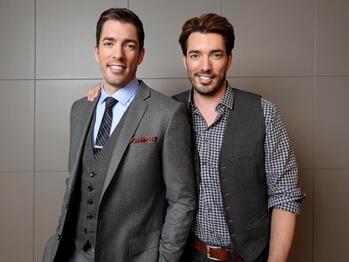 ​ For their millions of fans around the world, twin brothers   Jonathan and Drew Scott are masters of the impossible – finding   and transforming ordinary houses into dream homes on their   megahit HGTV show Property Brothers. As hosts of multiple top-   rated series on HGTV including Property Brothers: Buying &   Selling, Property Brothers at Home and Brother Vs. Brother, they   entertain millions of fans with their winning blend of sibling   rivalry and humor. Now fans can experience the duo in person   during a stop on their nationwide tour, The Scott Brothers’ House Party, presented by HGTV.  Their new memoir, It Takes Two: Our Story (Houghton Mifflin Harcourt – on sale September 5), Jonathan and Drew’s House Party tour offers fans an uncensored look into their lives. There will be plenty of audience participation as they breakdown their do’s and don’ts, share the wisdom they’ve gleaned as entrepreneurs, and reveal all the hilarious moments that don’t make it onto television. Door prizes, impromptu design consults, behind-the-scenes bloopers, and plenty of laughs will round out this fun evening with Jonathan and Drew.

​
- This live event experience with the Scott Brothers from HGTV will take you behind the scenes of their multiple hit TV shows, share tips and tricks to design your dream home on a beer budget, take Q and A from the audience and so much more.